I just put on a cardigan for the first time since May. Looks like a cashmere hug. This summer has been too hot to wear anything but a smile. But the little chill in the air gave me a shiver of anticipation.

Maybe I love fall because I grew up in Australia, where we don’t really have it. It’s just hot… and then a little less hot… then still hot.

But in Britain in September there is so much to look forward to.

Ah, yes – hugs. Because this summer we suffered not only from a garden hose ban, but also from sexual drought.

On those hot, humid nights, rubbing against a sweaty body had no appeal. The very thought caused a case of pre-coital depression.

Being “creative in bed” meant knitting while watching Newsnight.

Sex in the fall reminds me of the times it escapes you that you’ve put your windshield wipers on intermittently. You forgot everything and then – whoosh!

I also love the “back to school” feel of fall. After the indolence of summer, lounging by lukewarm pools reading substandard novels, drinking unhealthy concoctions adorned with silly umbrellas, being arrested for GBH for slapping yourself with mindless insects – the cool weather we plunges into an energetic mood of self-improvement.

Every fall, I contract a seasonal disease that I call ‘listeria’; a desperate desire to write to-do lists. Determined not to be on Loser’s Anonymous, this year’s list involves jogging; host more dinner parties (when you want a Michelin star, dreams can come true, right?); not drinking so much cooking wine while preparing my dinner that I forget to turn on the oven; and go sober.

Of course, my obsession with checking off my list means I’ll probably be too exhausted for any romantic encounters — especially after all that exercise I’ve lined up to do.

But surely, if God had wanted us to jog, He would have given us radial toes? My tights can run, but not me. (That’s another good thing about fall – thick, black stockings. Why do blondes have more fun? Because brunettes are so busy waxing and shaving.)

I think by the end of next week, I’ll probably have a new “to do” list with just one instruction: ditch the lists.

It will take a lot of self-control and determination, but I’ll probably even be able to quit drinking. A pleasant state of boredom will overwhelm me. We could even speak of apathy… 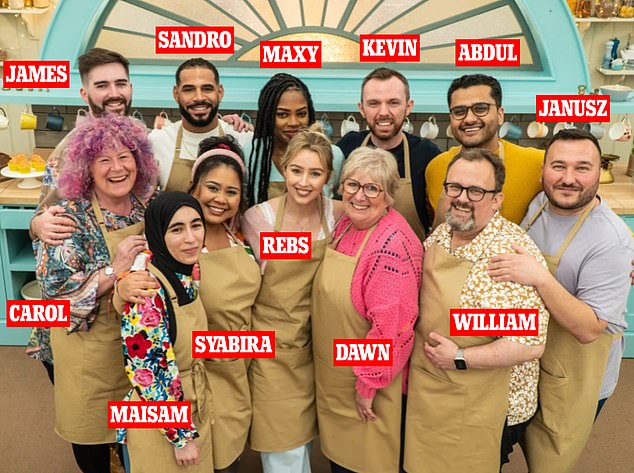 Because, in truth, who has time to improve in the fall, when there are so many other things to distract us?

Fasten your apron strings because on September 13, Bake Off is back! Despite my desire to host more dinner parties, the kitchen is not my natural habitat. I use my smoke alarm as a timer.

The only pastry I do is on a beach, in a bikini. My definition of a “hostage” is a woman forced to cook for visitors… But I love watching others do it.

And, of course, fall also means the return of Strictly. As a freelance writer, I dance on thin ice for a living – but when it comes to fancy footwork, I’m a complete failure. I am to dance what Vladimir Putin is to world peace. I dance out of tune.

The lessons didn’t help. As my salsa mates spun around like they had Tina Turner in their panties, I could hear my feet thinking.

One night I was so busy counting that I ran into the teacher from behind and concussed myself in a head-on collision with the piano.

But my own clod-hopping doesn’t mean I don’t like curling up on the couch with Craig, Motsi, Shirley and Anton as they put the show’s glittery celebrities through their paces.

Another biting fall word is boxes. Not only does the Wonderfully Dirty Industry return for a second series – it follows a group of ruthless young graduates having a ton of fun as they sleep and navigate the cutthroat world of global finance – we’ll also be Bite your nails up to your elbows watching Keeley Hawes outsmart a ruthless killer in the new BBC thriller Crossfire.

But don’t forget to look out the window once in a while because this month, Britain will never be more beautiful. As the nights arrive, the main streets are adorned with luminous garlands. The warm smells of roasted chestnuts on street corners, the coffee escaping from cafes and the rain pattering on the windows only add to the comfort. (Rain…remember that wet stuff that comes from the clouds?)

Best of all, Mother Nature is about to put on the most spectacular show – a slow-motion fireworks display of color. As the whole country turns red, auburn and golden, allow yourself to forget about the woes of the world for a while and simply fall in love with “autumn”.